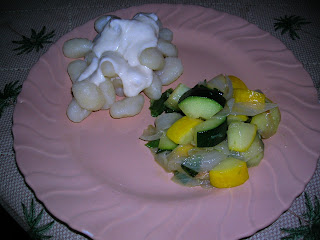 I'd like to make my own gnocchi some day. It's been about four months since I had that delicious dish in Chicago and can still taste it. I picked some up at Leon's and made a simple parmesan cheese sauce with cracked black pepper. The dish I had in Chicago also had parma ham and peas which I omitted since I couldn't find any in town that wasn't paper thin. So I grilled some chicken tenders last night to go with the pasta tonight and then forgot them. Putz! Oh well, we were plenty full of dumplings.

Our garden is overflowing with great things so a sauteed summer vegetable side sounded like a winner. Zucchini, yellow squash, onion, sweet pepper, basil, and garlic in a little olive oil. I debated throwing some cherry tomatoes in with the other veggies but held off. Maybe next time.

Have a great week everyone!
Posted by Chris at 7:21 PM 3 comments: 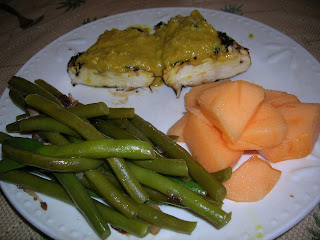 So I had a recipe for a grilled chicken with apple macadamia nut sauce. What would one serve with such a combination of flavors? Not to mention the chicken had marinated in a potion of tamarind paste and garlic for several hours. I had the nuts in the pantry and a couple of Granny Smith's in the fruit bowl so what the heck right? I'm not one to shy away from dishes that stray from the norm but even this one seemed a little "out there". Let's not forget I have "the boy" to feed as well. He who would eat cheeseburgers for every meal I think!

I had some wet tamarind pulp which I macerated in hot water then smashed through a fine sieve three times. This yielded some tamarind puree which reminded me of the apple butter my Grandma used to make. I added minced garlic, salt, pepper and some veggie oil and threw it over some skinless boneless chicken breasts.

While the charcoal was getting ready I sauteed some shallot, garlic, fresh ginger and just half of a green chile until they browned a little. In next went the apple, a little turmeric and some coarse chopped macadamia nuts. Sauteed the apple mixture for a few minutes and then added chicken stock, soy sauce, fish sauce and fresh lime juice. A wee bit of salt and pepper to season and I made myself a Hemingway daiquiri with the left over lime juice.

The sauce color was a little gross but the combination of the two really came together. Even the boy ate the chicken although without the sauce. He'll come around eventually!

Sauteed some fresh string beans from the garden and had some nice melon to balance the whole plate out. Quite good and next time I'll up the green chili for a little more zip in the sauce. 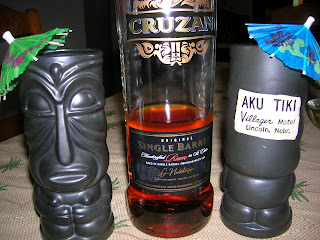 Those of you old enough to remember will recall a neat little lounge at the Villager on O Street. My folks used to go there back in its heyday. My Mom said "Your father made a fool of himself there". Boy I'd love to have been a fly on the wall then. My in-laws had more happy (ha!) recollections of Aku Tiki.

I don't recall if I've ever been there and I wish I did. The web hasn't been very gracious with even the slightest anecdote from visitors but I'll keep digging. I love the tiki/polynesian scene and wish we had something similiar in Lincoln today.

Thanks to ebay and a seller right here in Lincoln, I can pretend I'm there having a delicious Mai Tai or Sidewinder's Fang in my own mugs specially created for the Aku Tiki back in who-knows-when.

If any of you have a memory of Lincoln's only Tiki bar, please share. Thank you!
Posted by Chris at 6:06 PM 6 comments:

Some of you probably remember. Some of you might not. Rent them, watch them. They have messages that are as important today as they were then.

My favorite movie is The Breakfast Club. I know, I'm a dork. So what.

Hi there, it's been a while! 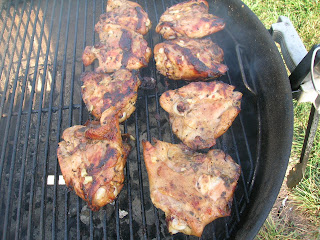 So it's been crazy around the house since July 4th. We have all enjoyed the summer so far. It blows me away that Alex starts school August 19th. Where has the time gone? We've had swim lessons at the downtown YMCA twice a week besides swimming in the backyard pool. Bicycle riding, visiting City parks, staying with grandparents, farmers markets, cruising in the Z car....whew, what a summer.
I've been reading a lot of food blogs to inspire me in new ways. The Dish and SheSimmers have been two of my favorites lately. I love to eat and I'm excited to try these new dishes.
We spent 3 hours at the Highlands pool today but I set some chicken up this morning for dinner tonite. Bone in, skin on thighs in a marinade of tequila, orange & lime juice, garlic, oregano, olive oil, salt, pepper and two roasted jalapenos. I slow cooked them directly over a very low fire for forty minutes and they about fell apart. The better half thought it was pretty good. I agree. Our garden has produced some of the most eye-watering onions ever and they were a tasty addition to some fresh quacamole.
See you all again soon!
Posted by Chris at 7:12 PM 3 comments: