Thought I'd try some beef this time. This is a Brazilian recipe where you stuff various things into holes poked in the roast. You're supposed to use a "larding iron" which is a V shaped rod but I used an old sharpening steel. 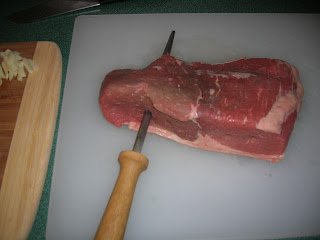 Started with a 3 pound roast. Poked a gob of holes in it. Into the holes went yellow and green pepper, carrot and onion. The recipe called for ham in some of the holes so in it went. Into some smaller slits on the surface of the roast I put slivered garlic. Seasoned the beast with salt and pepper and fired up the grill! 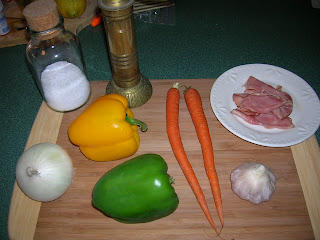 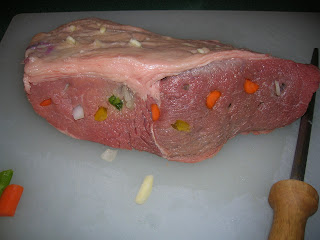 I grilled it indirectly over a drip pan for about two hours using some new hickory Kingsford I got from Leon's. That store rocks! 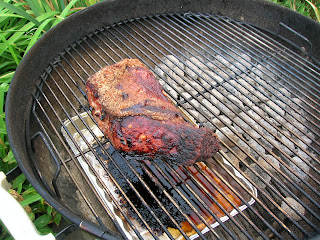 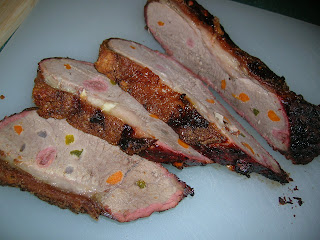 I should have simmered it in the pan, it was a bit dry.
Posted by Chris at 4:36 PM 5 comments:

I came across a 250 gallon container to upgrade my rainwater harvesting project. Much easier to deal with than moving the full 55 gallon plastic barrels I was using. 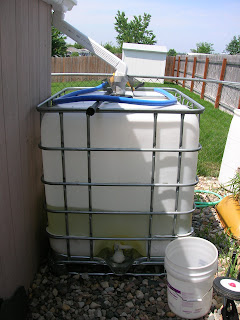 Its a monster! I had to take down some fencing to get it into the back yard. It has a nice bottom feed drain valve so I can hook up the hose if needed. I'm thinking of hooking up one 55 gallon container to the main house downspouts, I figure the more saved the better. And with the temperature starting to climb, the potted plants and flowers will be getting more frequent drinks. Hopefully we still get some good rain in July and August. 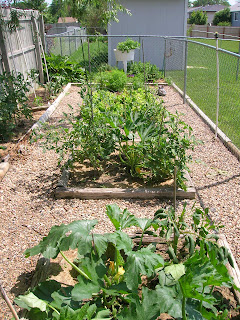 The garden is doing really well. Tomatoes, zucchini, carrots, cucumber, basil, Thai basil, cilantro, flat leaf parsley, peppers, and a couple of Dahlias for the heck of it. And three elephant ear garlic too.
Posted by Chris at 3:19 PM 3 comments:

I was a Cub Scout back in the day, then other interests took me out of Scouting. I also spent many summers at my Baptist church camp, Camp Moses Merrill near Morse Bluff.

When I heard about last nights tornado in Iowa, I was filled with emotion. I remembered being at church camp one year when the sky was green and the wind howled and sirens sounded. I remembered how I felt then as a twelve year old. I almost know how those kids in Iowa felt last night. Terrified no doubt.

Kindest thoughts today for the victims and survivors.
Posted by Chris at 9:54 AM No comments:

Vietnamese Pulled Pork on the Weber

Sunday I tried a recipe I'd found on the web. Most folks have had North Carolina pulled pork so I thought this would be a nice twist.

Used a boneless 5 pound pork shoulder that was conveniently split in half. Gave both halves a nice rub with Five Spice powder, black pepper, kosher salt, dark brown sugar and a little cayenne. Wrapped both in plastic wrap and put in the fridge Saturday morning. 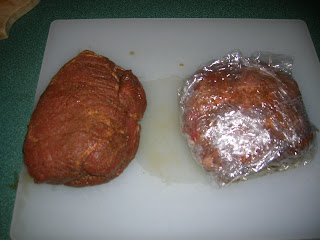 Sunday morning I started a large load of charcoal and at 10 am, put the meat on the Weber.
I anticipated cooking them until 5 pm. So in the meantime I made the basting sauce and the finishing sauce.

The basting sauce was a simple 5 minute simmer reduction of rice wine, 5 Spice powder, chicken stock, dark brown sugar, fish sauce (Anchovy), black pepper and a quarter teaspoon cayenne. I basted the pork half way through the cooking time and then halfway again.

The finishing sauce was a bit complex but not too bad. First, I made a bittersweet caramel sauce. Sugar and water, that's it. This caramel sauce is a staple in Vietnamese dishes. I have to admit I ruined my first attempt as the heat was too high. Here's the second attempt. 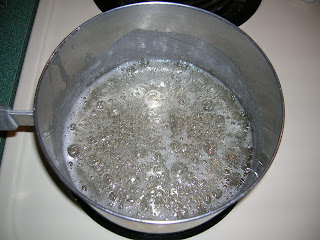 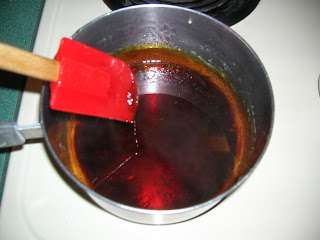 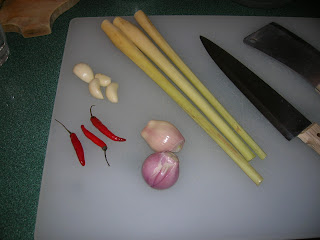 Next, into the food processor went lemongrass, garlic, and shallots. This went into the frying pan with some canola oil. After a bit I added fish sauce, some of the caramel sauce, black pepper and minced Thai chili peppers. Simmered it all for a bit then reduced it with some chicken stock. The house was filled with exotic smells! I forgot to take a picture of the finishing sauce but look for it on the finished sandwich. 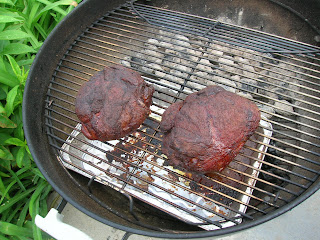 The pork basically fell apart which is what you'd like for a pulled pork. Nice spicy crust, moist tender inside. 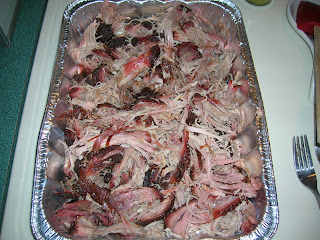 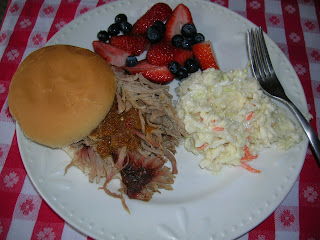