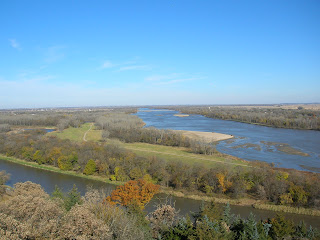 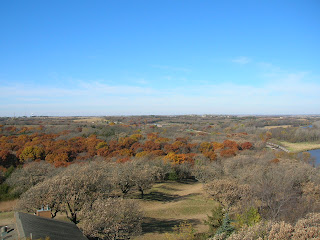 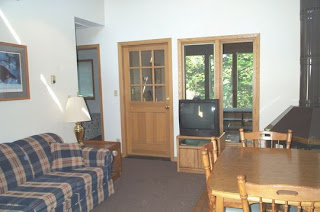 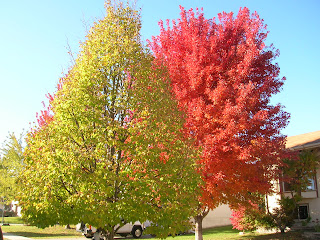 October is my favorite month. Usually! I can't remember a wetter October and I'm glad the sun is trying to shine this All Hallow's Eve. I like October because it's my birth month and I usually take some vacation to just mess around and enjoy life. All the precipitation put a slight damper on the month but we made the best of it.
With "The Boy" being in kindergarten this year we've had the past week off for fall break. Two months ago we reserved a cabin at Mahoney State Park for the first three days of this week. I haven't been "camping" since I was a kid and back then we had either a camper on a pickup truck or a camper trailer so having a cabin was pretty plush. It had two bedrooms, full bathroom, nice kitchenette, screened in back porch and a fireplace. We loaded up the truck (dog's too) and had a great time. We hiked every trail several times, saw a plethora of wildlife including many deer that sometimes were within 20 feet. Zack the boxer somehow escaped his choke collar and bounded off down the trail after a white tail one afternoon. We chased him down a creek draw and as we climbed the other side, there he stood looking at us with a "come on already" look on his old face. Pretty spunky for a twelve year old dog with bad sight and hearing. We all had a good laugh at his expense. The family enjoyed having a roaring fire every night, just relaxing and enjoying the peace and quiet. No phones, no TV (drove the kid nuts not to have it on), no cars with fart can mufflers roaring down the street. It was good to come home but I will miss the cabin for awhile.
I hope to do some yard work today, put the Z car in storage, buy a better blender for an upcoming Tiki Drink weekend and slow cook a nice four pound roast for dinner tonight.
Bring on the trick-or-treaters!
Posted by Chris at 11:01 AM 2 comments:

I found out today that Norm's show is ending after 21 years. Whether it was the Workshop or This Old House everyone I've ever mentioned him too knew who he was. That's a pretty damned good saturation level.
I've built a fair amount of stuff around the house and Norm is a great inspiration. He always makes a project seem easy and took the time to explain difficult concepts. I think he inspired me to take on challenges I would never have attempted. Through him and his This Old House co-horts I've tackled wiring and plumbing as well as carpentry.
I'll miss seeing new things from Norm. But I'm glad he's in syndication and plans on staying with the other show for now.
We all are inspired in our lives by many different people and things. Who inspired you?
Posted by Chris at 11:09 AM No comments: