Squash? Silly name for a sport and a drink.. 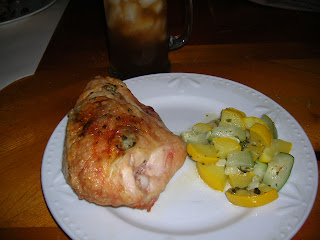 I wonder why and who decided that smacking a soft rubber ball against a wall should be called "squash"? And who decided that a sweetened or unsweetened fruit-based concentrate when mixed with water or seltzer would be a drink named "squash"?
I'll just stick to those tasty ones that come out of the garden. I tried playing squash when I was a kid. It was good exercise but I never really got hooked by it. Meh!
So I made an herbed butter, shoved it under the skin of a whole chicken, roasted it on the grill and served it with more late summer veggies from the garden. 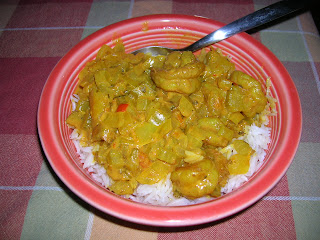 Also had another shrimp curry that I changed up the ingredients a little. Very tasty with a minced red chili pepper added to the onion and celery. I reduced the amount of tomato this time and was very happy with the overall result.
Posted by Chris at 9:12 AM 2 comments:

I was a Big Red Football kid 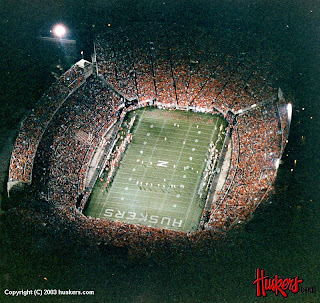 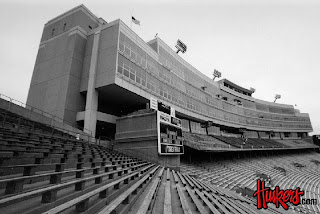 Glen's birthday is the 26th. He's usually not far from my mind during football season. This year he's in my thoughts a little more due to the 300th sellout at the stadium.
When I was just a single digit kid he'd take me to work with him at General Stores in the West Stadium. I remember his boss "Smitty" had nudie calendars in his "office". The old school kind where you had to lift the transparency up (which had the clothing painted on) to see the nude underneath. Back in those days the West Stadium was a dark dirty mysterious place unlike the glitzy showplace it is today.
Glen went from General Stores to the North Stadium to become the Equipment Manager for the freshman football team, the baseball team and he stored equipment for the track team in his "room". He spent years and years washing sweaty towels and socks and jocks for hundreds and hundreds of football players and coaches. When Gib Babcock retired in the mid 70's, Glen was promoted to Head Equipment Manager for the whole Football Athletic Department. He had a great funny guy named Walt Johnson working under him. Glen in the South Stadium and Walt in the North.
I started attending games in 1976 and have enjoyed some of the most memorable moments in NU football history at the old stadium. Being able to travel with Glen and the team to some away games and every bowl game from 1976 to 1987 is a special treat I treasure and won't ever forget. I was thrilled for my Dad when NU won championships in the 90's. He was proud.
I remember him coming home from work one day in a shiny red Chevy van from DuTeau's. He had previously had to rent U-Haul equipment to haul gear to NU's road games. Now he had a nice vehicle finally that would do the speed limit! The old U-Haul's would only go 45-50 uphill! The amazing part is he could take everything he needed in that one van with just two seats in it. Nowadays they use semi trucks with 53 foot trailers to haul all the gear. Crazy.
I feel a special connection to Memorial Stadium on her 300th sellout. I grew up in that place. Rode my tricycle and big-wheel up and down the ramps in the North Stadium. Learned to drive a motorcyle and a car there, slowly going around the "track" that encircles the field. I always enjoyed going to work with Dad. The quietness of the place during an off-season day is such a contrast to game day. I feel a large tug of emotion when parts of the stadium get demolished, especially the parts that I spent a great deal of time in. The original north end may be gone but I won't forget it.
I hope the team wins Saturday. But even if they don't, the significance of 300 sellouts and more importantly of the stadium itself will remain. A tribute to those that served this country. That is what I hope most people remember. Glen Abbott served his country in the Army during Vietnam. He worked for the University for many years.
He died April 8th 2005. I miss him.
Posted by Chris at 11:16 AM No comments:

Disgusting yet so tasty 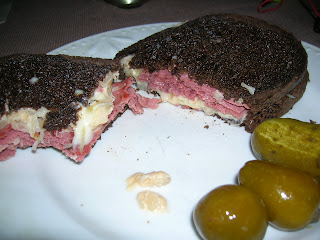 A Reuben for your consideration. How does something that looks this gross taste so darn good? I'd weigh three hundred pounds if I ate as many of these as I wanted. I tried to find some "Russian dressing" but resorted to standard Thousand Island. Anyone seen "Russian" dressing anywhere in town? I'd like to experiment next time. Different bread, different dressing but still use the basics. Corned beef, swiss cheese and Frank's kraut.

I remember my first Reuben at the Bombay Bicyle Club on Dodge Street. Do you suppose it really was created in Omaha? We'll never know for sure I guess but I like to think it was.

It sure makes a tasty lunch on a Saturday afternoon.
Posted by Chris at 9:20 AM 3 comments:

Are you ready for a nice holiday weekend? My employer decided not to be open tomorrow so I'm thrilled to have a full three days off to goof around. Being salaried, it won't affect my paycheck either way. Woo Hoo! 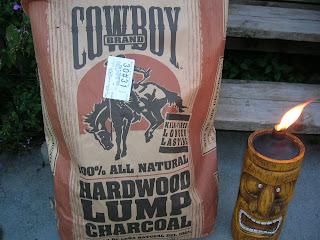 A few months ago I stumbled into the new Bishop Heights True Value hardware store just north of Shopko at 27th and Hwy 2. It's got a good selection and is fairly close to home. I went there for pool stuff but walked out with a huge bag of lump charcoal and a cool tiki torch lantern for the patio. I've since become hooked on this charcoal as it's pure hardwood which lights faster and burns hotter than briquettes. I don't think it lasts longer than the Kingsford but it sure do make the food taste good! 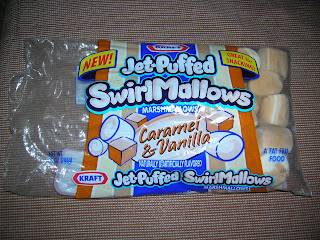 I grilled a couple steaks tonight and we toasted some new flavored marshmallows for a treat afterwards. The boy loves them and they're fat free. We had smores a couple days ago that were pretty rockin' as well. 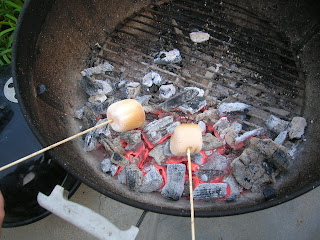 I've picked up another of the tiki torches and they were both helping tonight as the skeeters were thick as thieves.
When more funds are available we plan on enlarging our deck for even more enjoyable evenings in the back yard. I ran across some cool solar tiki torches at Taylor gifts online and when the sun goes down it's pretty cool when they're lit up. 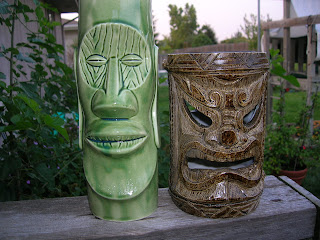